Join us in saying NO to false climate solutions at the climate camp of the year. Here we will learn how social and international solidarity can create real solutions to the ecological crisis. We do not accept that the “green” momentum will be exploited for the profit of the few. We insist that the work of our movements lead to a real transition of society in the name of climate justice. We will put ourselves in the way of the continued destruction of our nature and climate. 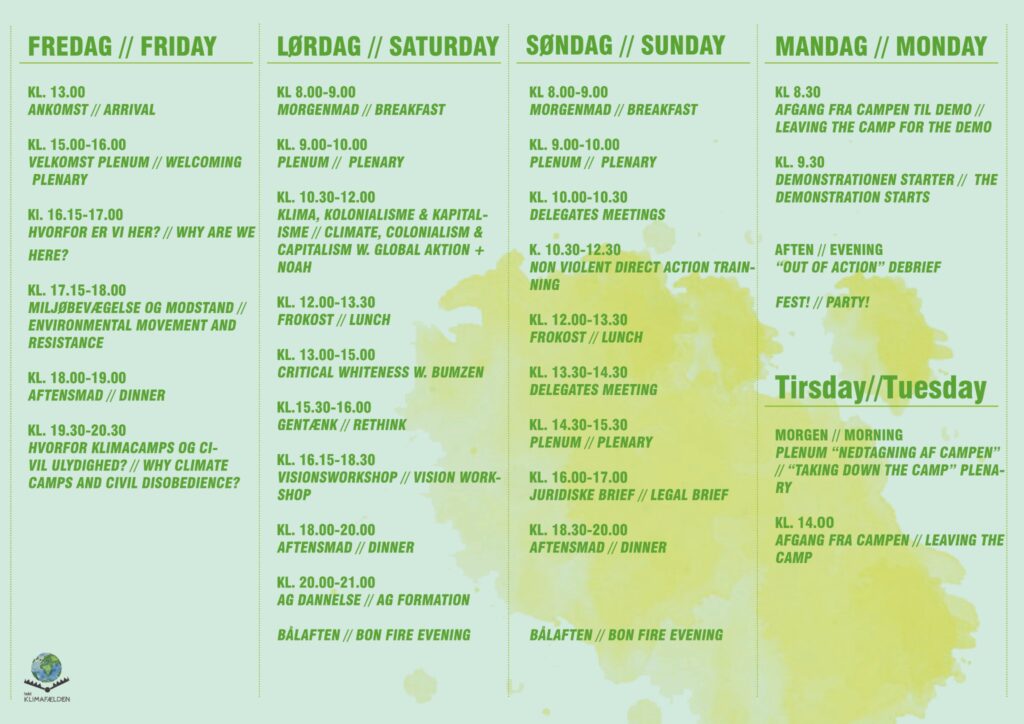 WHY HERE IN ÅRHUS?

Aarhus = a showdown with growth and greenwashed fossil infrastructure

We are in the middle of a climate crisis, but decision-makers continue with business-as-usual. The forest fires, floods and storms that ravage the world these years are not normal. Climate science says bluntly that it has never been more critical. Even the existing fossil infrastructure must be stopped before time – but we keep planning and building more fossil infrastructure! We do this with two excuses: an infrastructure need due to eternal growth, and climate neutrality due to climate fixes.

AND THIS IS WHY WE MUST MEET AT THE CLIMATE CAMP IN ÅRHUS! Because the city is planning one of DENMARK’S BIGGEST fossil infrastructure projects: the expansion of Aarhus Harbour. The industrial and shipping port is to be expanded by 105 ha, an area that is five times as large as the entire Aarhus Ø. Local groups in Aarhus are organizing against the port expansion – more than 1,500 consultation responses have been submitted and 90% of these were a no to the expansion of the port.

But will the expansion continue anyway? YES!

The climate campaign against False Green Solutions 2022 is in solidarity with them, and in direct opposition to the port development. It will outshoot Aarhus’ climate goals and cement our future in increased growth – with all the pollution and exploitation that comes with it.

There must be a showdown now with projects such as the port of Aarhus, which are not part of the future. We want a genuine green transition that is not based on false tech-fixes and over-exploitation, but that actually creates better lives, a healthier nature and a climate-proof future for the next generation.

WHAT CAN I EXPECT?

What can I expect?

To continue a long tradition of climate camps like Ende Gelände, Free the Soil, Folk mot Fossilgas and more, we are making a similar climate camp in Denmark. At the camp we will meet and inspire each other, and discuss how we create real climate solutions in coherence with the living world. You will be able to participate in discussions, workshops, skill shares, demos and more… The main language at the camp will be Danish, but we will strive to make it accessible for English speakers as well, and hopefully even more languages.

Date of arrival is on the 2nd of September from 13:00 and departure in the morning on the 6th.

Can you only participate in some of the days? Then we suggest you prioritise the 4th-6th of September with arrival and departure in the morning.

Why this climate camp?

False solutions have derailed the green transition in Denmark. We have demanded climate action, but instead only got a house of cards of inadequate solutions that are neither sufficient nor green.

Promises of technological solutions like Power-to-X, CO2 storage and bioenergy are being used to pretend that everything will be okay. In reality the ‘solutions’ are in best case not enough and often directly harmful. They are being used to pretend that the big polluters don’t need to change anything. That neither the agricultural sector, the transport sector or Aalborg Portland have to take responsibility for their pollution.

Now we are putting our foot down! We want a real transition that is not based on an overconsumption of the earth’s resources and a historic exploitation of others. We want a green transition, with a society that is controlled by the living world instead of profit.

How do I join?

Come with your sleeping bag and tent – check our packing list
beforehand (which will be uploaded soon). You can also join for an
action training before you come.

COMMUNAL DEPARTURE FROM COPENHAGEN: We have a bus going from Copenhagen on the 2nd, 9:00AM and returning on the 6th at 14:00. Book your ticket here (its free!): https://forms.organise.earth/index.php?r=survey/index&sid=654845&lang=da

It’s important that you write an email if you end up not using your bus ticket – so we can give it to someone else!

How do I stay tuned in?

Find the latest updates on this website or dukop.dk

Together we are stronger – so mark the 2-6th of September on your calendar and bring your buddy along!

We come from a variety of backgrounds, united in the knowledge that the climate crisis is worsening and that something needs to be done about it. Despite Denmark’s attempts to greenwash itself, we know that the currently presented “green” solutions are incompatible with any serious attempts to address the climate crisis. Therefore, from the 2nd to the 6th of September, we will gather to shed light on this problem and work on addressing it.

The safety of all participants, workers, and other people in the area is very important to us. We will take care and be mindful of each other, we will be non-violent and not perform any form of protest that might unnecessarily endanger ourselves or others. We will not be under the influence of alcohol or other drugs during the protest. We will offer several modes of engaging with this protest taking into account the different privileges and levels of experience we have.

When engaging with the police in a racist society such as ours, not everyone is treated the same. White people, especially those carrying many privileges within this society, should reflect on their position in regards to this. We are especially mindful of the fact that others might be treated differently by the police, and take extra care not to put others in any situation or danger they themselves did not choose. We will collectively decide on how to interact with the police through plenums or similar.

We come from different social movements and political spectra and see ourselves as part of the climate justice movement. Therefore we oppose the social and ecological consequences of fossil capitalism and neo/colonialism. We are in solidarity with all those who resist for a climate-just world.

In our camp and protest we envision the world we want to see. We make our decisions in a grassroots democratic way and by consensus; we dismantle unjustified hierarchies as much as possible.

Though we have our backgrounds in societies rooted in many forms of discrimination, we are united in our fight against sexism, racism, queerphobia, islamophobia, anti-semitism, nationalism, fascism, and capitalism, and will oppose any such tendencies forcefully.

We recognise that a protest is made out of different kinds of work, and we value this work and all those who carry it out. Those who cook, those who organise, those who clean, those who block, those who build, those who talk to journalists, and those who do anything else to make these days possible are all equally essential parts of the protest.